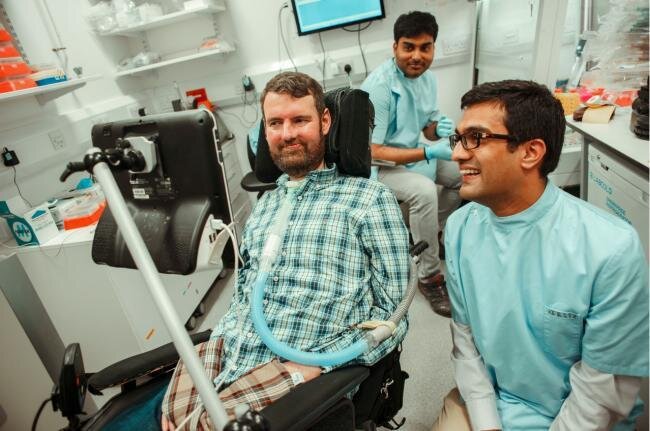 SCIENTISTS in Scotland have made a “very exciting breakthrough” in the race to find a cure for motor neurone disease.

Researchers at the University of Edinburgh identified a key cause of the illness which could be combatted by repurposing drugs approved for other diseases.

There is no known cure for MND, a condition which stops signals from the brain reaching the muscles, damaging them over time. More than 1500 people in the UK are diagnosed with the disease every year.

The new study was carried out at the Euan MacDonald Centre for MND Research.

The team there discovered that the damage to nerve cells caused by MND could be repaired by improving the energy levels in mitochondria – the power supply to the motor neurons.

They found that in human stem cell models of MND, the axon – the long part of the motor neuron cell that connects to the muscle – was shorter than in healthy cells. The movement of the mitochondria, which travel up and down the axons, were also impaired.

Dr Arpan Mehta, who led the study at Euan MacDonald Centre for MND research said: “The importance of the axon in motor nerve cells cannot be understated.

“Our data provides hope that by restoring the cell’s energy source we can protect the axons and their connection to muscle from degeneration.

“Work is already under way to identify existing licensed drugs that can boost the mitochondria and repair the motor neurons. This will then pave the way to test them in clinical trials.”

The study was welcomed by by charities including the foundation set up by Scots rugby legend Doddie Weir.

My Name’5 Doddie foundation described it as “a very exciting breakthrough”.

The researchers used stem cells taken from people with the C9orf72 gene mutation that causes both MND and frontotemporal dementia.

They used the stem cells to generate motor neuron cells in the lab.

Although the research focused on the people with the commonest genetic cause of MND, the researchers said they were hopeful the results would also apply to other forms of the disease.

The results of the study are now being used to look for existing drugs that boost mitochondrial function.

“We look forward to seeing if these positive results can be replicated for patients,” he said.

“Once researchers have identified a drug they believe could have the desired effect, this treatment could then be fast-tracked for human trials using the pioneering MND-SMART clinical trial platform – into which MND Scotland has invested £1.5m.

“Researchers, clinicians, charities and supporters are all working hard to take us closer to finding a cure and by joining together we’ll get to that day even sooner.”